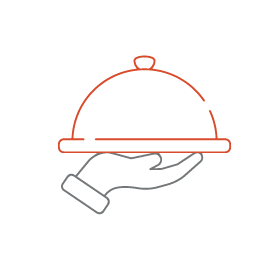 Kuchmistrai is a kitchen that protects and nurtures the culinary heritage of Lithuanian nobles, where the preparation of all dishes is supervised by the honorary officer of our manor – the chef master, and guests are invited to the table by the entertaining “zanavykai” (representatives of the Western Highland dialect).

As in ancient times, Kuchmistrai kitchen pays special attention not only to the menu, the quality of food, its presentation, but also to the farms from which vegetables, fruits, flour or meat are purchased.

Working with the manor’s suppliers, whose products will be selected to create the menu of the restaurant Kuchmistrai, is one of the most important and probably the most time-consuming daily activities of the honorary officer of our manor. In order to have dishes filled with antiquity and representing the culture of the manor kitchen on the guest tables, he works together with hospitable “zanavykai”.

It is no coincidence that quite quickly Kuchmistrai became famous for its stewed Guineafowl cake, stewed pigeon or Lithuanian wine tastings. The legends of their presentation soon spread widely, as did the stories about the food of the nobles of the Grand Duchy of Lithuania with toppings, tastings and feasts in Zypliai.

Kuchmistrai organizes gastronomic trips in time in the magnificent ancient ensemble of the Zypliai manor house, surrounded by traditions and secrets of the people who lived there.

Any cookies that may not be particularly necessary for the website to function and is used specifically to collect user personal data via analytics, ads, other embedded contents are termed as non-necessary cookies. It is mandatory to procure user consent prior to running these cookies on your website.